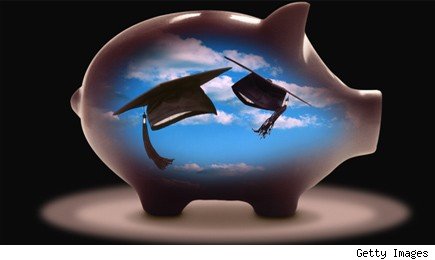 Whenever Main Street has a problem, Wall Street’s answer is to come out with a new financial product to address it. Lately, that product has more often than not been an exchange-traded fund.

But sometimes, the ETF puzzle piece doesn’t really fit into the spaces where Wall Street tries to place it. One example is in the popular college savings plans known as 529s.

With college getting more expensive all the time, savvy parents and relatives are doing everything they can to plan in advance for children’s educations. One of the most popular ways is by using 529 plans: tax-favored college savings programs sponsored by state governments that let your money grow tax-free as long as you use it for higher education expenses.

Like regular portfolios, 529 plans took a big hit during the bear market four years ago, as many plans had large percentages of their assets invested in stocks. Those losses caused interest in the plans to wane, which in turn has forced the financial companies that manage them to come up with innovations to try to attract new assets.

Recently, several states, including New York, Nevada, and Nebraska, have introduced ETFs as investment options in their 529 plans. Some program managers point to the greater trading flexibility of ETFs, which let you trade at any time the markets are open. By contrast, the mutual funds that most 529 plans primarily invest in only allow buying or selling once each day.

adsonar_placementId=1505951;adsonar_pid=1990767;adsonar_ps=-1;adsonar_zw=242;adsonar_zh=252;adsonar_jv=’ads.tw.adsonar.com’;
But ETFs really aren’t well suited to 529 plans. The biggest reason is that while ETFs make frequent trading easier, the rules governing 529 plans don’t frequent trading. Participants are only allowed to shift money across investment options once every year, and although you can direct new contributions to different investments at will, under those circumstances, the advantages of ETFs over index mutual funds are minimal.

ETFs do have a cost advantage over actively managed mutual funds, whose annual expenses can average well over 1%. But that may well change as more ETFs turn to active management strategies as well.

In most cases, 529 plans would get the same (if not better) performance by adding low-cost index mutual funds rather than ETFs. As useful as ETFs can be elsewhere your portfolio, they don’t suit 529s, and offering them as an option looks like little more than a gimmick to capitalize on ETFs’ positive reputation.