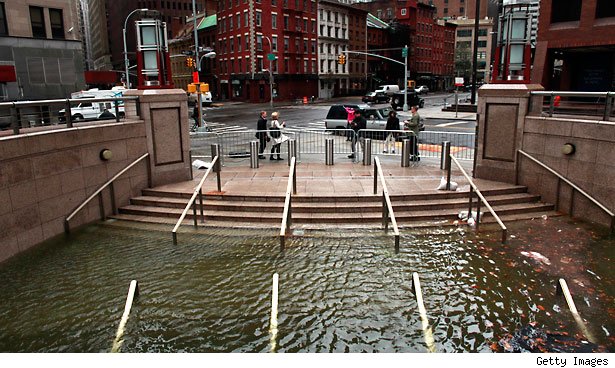 Hurricane Sandy took dead aim at New Jersey and Delaware on Monday, with sheets of rain and wind gusts of more than 90 mph knocking out electricity and causing major disruptions for companies, travelers and consumers. But for the overall economy, damage from the storm will likely be limited. And any economic growth lost to the storm in the short run will likely be restored once reconstruction begins, analysts say. Americans may even spend more before the storm when they stock up on extra food, water and batteries.

Preliminary estimates are that damage will range between $10 billion and $20 billion. That could top last year’s Hurricane Irene, which cost $15.8 billion. If so, Hurricane Sandy would be among the 10 most costly hurricanes in U.S. history. But it would still be far below the worst – Hurricane Katrina, which cost $108 billion and caused 1,200 deaths in 2005.

“Assuming the storm simply disrupts things for a few days and it doesn’t do significant damage to infrastructure, then I don’t think it will have a significant national impact,” Mark Zandi, chief economist at Moody’s Analytics (MCO), said Monday.The economic impact could be more severe if the storm damages a port or a major manufacturing facility such as an oil refinery, Zandi noted.

The economy expanded at an annual rate of 2 percent in the July-September quarter. Zandi said he isn’t changing his forecast for similar growth in the current October-December quarter of 1.9 percent. Economic activity in October and November might slow if factory output declines and some workers are laid off temporarily and seek unemployment benefits. But the economy could strengthen in December as companies rebound.

Here’s how the storm has begun to affect key areas of the economy:

Flights in the Northeast are all but stopped for at least two days. Airlines have canceled nearly 12,500 flights for Monday and Tuesday from Washington to Boston. The disruptions spread across the nation and overseas, stranding passengers from Hong Kong to Europe.

Total airline cancellations have already surpassed those from Hurricane Irene last year and are on par with the 14,000 that were scrapped due to the snowstorm that pounded the East Coast early last year. The Airports Council International, a trade group, said that even if the storm damage turns out to be minor, it could be a week before operations are back to normal at major East Coast airports.

Eric Danielson was trying to fly Monday from San Francisco to Norfolk, Va., to start a new job.
“It was supposed to be only a two-hour layover here in Atlanta, Ga., and now it’s beginning to be a 28-hour layover until tomorrow,” Danielson said.

Wall Street analysts expect carriers like JetBlue (JBLU), United (UAL) and Delta (DAL) to suffer a short-term hit to earnings as they spend money to shuffle crews and planes away from and then back to the East Coast.

The nation’s big stores are expected to lose billions, and the losses could extend into the crucial holiday shopping season. Sales at department stores, clothing chains, jewelers and other sellers of non-essential goods are expected to suffer the most.

The industry is entering the holiday season, when many retailers collect up to 40 percent of annual revenue. Retailers, excluding restaurants, could lose at least $25 billion in sales this week, estimates Burt Flickinger III of retail consultancy Strategic Resource Group.

Even home improvement chains and grocers that will benefit from shoppers stocking up on emergency supplies before the hurricane and cleaning and repair items afterward could lose sales in the long run if overstretched consumers feel they must scale back.

“If you’re spending $400 on a generator, that could hurt discretionary purchases,” said Brian Sozzi, chief equities analyst at NBG Productions.

Flickinger now estimates that holiday sales in November and December will rise 2.1 percent over last year instead of the 3.2 percent he had originally predicted.

A better idea of Hurricane Sandy’s effect will come Thursday, when some major retailers like Target Corp. (TGT) and Macy’s (M) will report sales figures for October.

The storm is affecting small retailers as well as large ones. For many small businesses, opening depended on whether employees lived close by or could work remotely. Businesses vulnerable to wind and water damage and power outages were forced to close. The storm also ruined business trips, meetings and presentations.

At Angelo’s Civita Farnese, a restaurant in Providence, R.I., the lunchtime crowd didn’t surface as usual on Monday. By 12:30 p.m., barely 10 customers were inside, and owner Bob Antignano had no hope of seeing the 200 to 250 he usually serves for lunch.

“It’s a wasted day and it looks like tomorrow probably will be as well,” Antignano said.

The loss of two days’ revenue will wipe out his profit for the month. He will face losses if the restaurant lost power. He would have to close, and the food in his walk-in refrigerator and freezers could spoil.

The cost to insurers is expected to rival the insured damage from Hurricane Irene last year. Damage from Irene cost insurers roughly $5 billion, according to Sterne, Agee & Leach Research. Because the storm is hitting a highly populous region, with “one of the highest concentrations of wealth in the world,” the damages are likely to run into the billions, say analysts at Morgan Stanley (MS).

CoreLogic (CLGX), a private data provider, estimates that there are 284,000 homes worth about $88 billion in the hurricane’s path.

U.S. insurers have more than $500 billion in capital, according to Morgan Stanley. That gives them enough of a cushion to withstand losses from most scenarios. Chubb (CB), Allstate (ALL) and Travelers (TRV) are the insurers most likely to suffer losses, because they claim a large share of the market in areas where the storm looks likely to hit. If losses top $10 billion, global reinsurance companies would also take a hit.

All major U.S. stock exchanges were shuttered Monday as areas around New York’s Financial District came under a mandatory evacuation order. The shutdown was extended through Tuesday, marking the first time since 1888 that the exchange will have been closed for two consecutive days because of weather.

Originally, the NYSE had planned to close just its exchange floor and allow traders to buy and sell stock electronically. Then it decided to shut down electronic trading, too. The NYSE said it was worried about putting staff who were needed to help run the electronic trading in danger.

NYSE Chief Operating Officer Larry Leibowitz said he also was worried about low trading volumes due to many investors taking the day off. The fear is that just a few trades could whip stock around like the storm outside, sending prices surging one minute or plunging the next. As automatic trading by computers has come to dominate stock trading, it was a fear voiced by other Wall Street experts.

The effect on auto sales may be minimal, some analysts say. Many people who planned to buy cars in the last few days of the month, when deals tend to peak, bought cars over the weekend instead, said Jesse Toprak, an analyst with car buying site TrueCar.com.

As a result, TrueCar isn’t changing its forecast for October U.S. auto sales. Toprak predicts that more than 1.1 million vehicles will be sold in October, up 11.5 percent from the same month last year.

Forecasting firm LMC Automotive predicts that 1 percent to 3 percent of new-car sales, around 20,000 vehicles, will be lost because of the storm. But LMC analyst Jeff Schuster predicts that those sales will simply shift to November. So the storm might have little or no overall effect on sales.

Toprak also notes that dealers could gain sales once the storm is over if people need to replace damaged vehicles.

Energy outages and disruptions in major East Coast cities “may take a toll on (power) demand unlike anything we have seen before,” Phil Flynn, a senior market analyst for Price Futures Group, wrote in a report.

Owners of the six biggest refineries in the Northeast shut down two and cut production at most of the others. That includes a full shutdown of the Phillips 66 (PSX) refinery in Linden, N.J., the second-biggest in the Northeast at 285,000 barrels per day. The biggest refinery in the area, Philadelphia Energy Solutions, was nearly shut. Oil prices fell as it appeared the massive storm will reduce demand by keeping drivers off the road and shutting businesses.

Once the storm passes, gas station managers have to work to make sure they have enough gasoline to sell. Those that operate under a major brand such as Mobil (XOM), Shell (RDS-B) or BP (BP) and have supply agreements may be able to get only a portion of their allotment. They have to compete with non-branded gas station operators for the rest – and pay whatever the going rate is.

“The challenge isn’t when everyone is hunkered down and there are no cars on the road,” says Jeff Lenard of the National Association of Convenience Stores. “The problem is how fast can you be replenished. You don’t want to be the guy with the bagged pumps.”

When disaster strikes, phone and Internet service often takes a hit, right when it’s needed the most. Phone companies on the eastern seaboard were topping up fuel for backup generators and lining up disaster recovery trailers to move into flooded areas after the storm passes.
Verizon (VZ), the largest landline phone company on the East Coast, said the storm had not yet had any major effect, and its network was performing normally. Verizon said all its cell tower sites have at least eight hours of backup power.

At AT&T (T), employees were adding portable generators to cell towers and checking on fuel levels.

Even if cellphones work, wireless networks may be overloaded by people calling to check in on each other or surfing the Web. That’s why cellphone companies recommend text messaging rather than calling in any disaster, because text messages use much less network capacity.

Copyright 2012 The Associated Press. All rights reserved. This material may not be published, broadcast, rewritten or redistributed.