When owner Gigi Liaguno-Dorr moved the business to rented space a few blocks inland for the summer of 2013, the move was hailed as an inspirational symbol of a plucky blue-collar town’s determination to rise above the deadly storm.

But Jakeabob’s won’t live to see the second summer after Sandy. Liaguno-Dorr shut it down for good last Friday, unable to make a go of it in a town still reeling from the storm, and still unable to secure timely rebuilding aid for what was once the town’s signature nightspot.

So a business that once was a symbol of hope and recovery has now become a symbol of despair, illustrative of the hard time many New Jersey and New York residents and business are still having in getting back to normal a year and a half after Sandy.

“I agonized. This is two times now that I was forced out of business against my will,” Liaguno-Dorr said, starting to cry softly. “You feel like a failure, but I know I didn’t fail. We paid our premiums, did everything we were supposed to do.

“We survived the storm. But trying to get back to normal is what’s going to kill us,” she said. “Why is this so difficult? Why is it taking so long? Why are there so, so many roadblocks everywhere you turn? I’ve had many sleepless nights over this.”

In the months after the storm, Liaguno-Dorr was a fixture at Borough Hall, helping coordinate donations and helping residents navigate the bureaucracy even as she struggled with her own situation. She still runs a community kitchen Monday and Tuesday nights at the restaurant for the area’s needy.

Simone Dannecker, whose home a few blocks away was flooded during the storm and now needs to be elevated after she spent a small fortune to repair it, said Liaguno-Dorr was an inspiration to Union Beach.

“She has done so much to help this community pull through the storm — that alone should get her an award and qualify her for some kind of help,” she said. “This sends the message that we expected all along: that there’s nobody out there willing to help us.”

“We have been working closely with her, and we expect to be able to approve a loan for some combination of working capital and construction funds,

for a fairly significant amount of money,” she said. She could not offer a timetable for when the aid might arrive, though.

By now, Liaguno-Dorr had hoped to have construction underway on an elevated replacement for Jakeabob’s at its original waterfront site. But a dispute with her bank over an escrow account (they applied the $453,000 from a flood insurance payout to the outstanding balance of her mortgage) used up all the money she planned to use to start rebuilding. And she said insurer Lloyd’s Of London, with whom she had a $1.2 million policy, offered her $9,657 — with a $10,000 deductible. She is suing the insurer, which didn’t immediately respond to a request for comment Monday.

“I have zero in the bank, nothing at all,” she said. “Now I’m stuck. What this shows is what our situation truly is. Everybody is going through this, businesses and homeowners. It’s reality, sad reality.”

Liaguno-Dorr said the two closures of Jakeabob’s cost 74 people their jobs and deprived Union Beach of a much-needed gathering spot. She is looking for a job now, preferably in the food industry.

“We agonized over it,” Liaguno-Dorr said. “You want to go out on your own terms, not being forced to for a second time. But as a business, at some point, you’ve got to stop the bleeding.”

She still holds out hope of someday rebuilding Jakeabob’s on the bay. 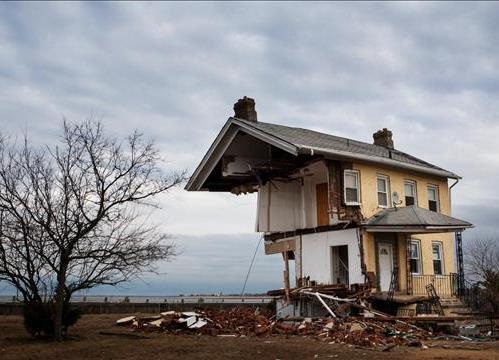 Copyright 2014 The Associated Press. All rights reserved. This material may not be published, broadcast, rewritten or redistributed.