2014 has just begun, and already, investors have seen some surprises. A rare first-trading-day drop in the stock market has engendered fresh nervousness about the prospects for a market correction.

If you’re one of those worried watchers, consider keeping one eye on exchange-traded funds. Because they cover many different portions of the stock market (as well as other financial assets like bonds, commodities, and real estate), they are worth watching as barometers of the respective markets they track. And that’s just one way ETFs can help you take advantage of any market environment, no matter which direction stocks move.

Here are 14 ETFs to keep an eye on in 2014. To be clear, we aren’t recommending you go out and all of these ETFs. Use them as an early-warning system for changing market trends.

The ETF known as the “Spyder” is the largest ETF of all, with assets of nearly $175 billion under management. The ETF tracks the S&P 500 index, and you can expect its results to come within a small fraction of a percentage point of the stock market benchmark’s gain or loss for 2014. But keep an eye on this ETF not just for its price moves but also for its volume, as it’s used by institutions and individual investors alike to get low-cost exposure to one of the most popular measures of the stock market.

In 2013, for the first time in years, bonds took a beating, with long-term bonds like the ones held by this ETF posting some of the worst losses. If the Federal Reserve keeps on taking steps to reduce its influence on the bond market, rising interest rates could cause this and other bond ETFs to suffer more losses in 2014.

Gold plunged in 2013, ending a string of 12 straight years of gains. Many gold bugs think that now is the time to take advantage of the opportunity to buy the yellow metal at cheaper prices. But others believe that Fed actions to push interest rates up will also result in less interest in gold compared to income-producing investments. Watch for an ongoing tug of war between these views in 2014, with the potential for a rush to gold as a safe-haven play if stocks fall.

Within the stock market, the small-cap stocks of the Russell 2000 index have done even better than the large-cap stocks in more popular market benchmarks like the Dow Jones Industrials and the S&P 500. Often though, as bull markets age, small-cap stocks are the first to peak and start falling. If small-caps turn downward more sharply than their large-cap counterparts, it’ll be one more sign that stocks could be near the end of their ongoing positive run.

Emerging markets were among the best performers during the early 2000s, as investors finally realized the growth potential of rising economies like China, India, Brazil, and Russia.

Within the U.S. stock market, the consumer discretionary sector was the best performer in 2013, with companies like Best Buy (BBY) selling more appliances and other high-ticket items, while automakers Ford (F) and General Motors (GM) rocketed to huge sales gains. Strength in consumer discretionary stocks relies on the ability of mainstream Americans to spend on the items they want, and that in turn makes this ETF a useful gauge of the entire American economy.

Solar stocks enjoyed their day in the sun in 2013, and this solar ETF more than doubled last year. Adoption of residential solar projects has transformed the industry, and despite the share-price gains, there’s plenty of room left for further growth. As long as the big financial incentives offered by governments in the U.S. and around the world to adopt solar persist, the companies the Guggenheim ETF owns should continue to do well.

After decades of stagnation, Japan recently pulled out all the stops to try to reawaken its flagging economy. With stimulus measures that included moves to boost exports, the Japanese stock market posted its best year in more than four decades. Yet the price it has paid been a weaker yen, which watered down the big returns for U.S. investors, and highlighted the prospect of competitive currency devaluations among the world’s biggest economies as they try to compete more effectively.

On the other side of the world, Europe has been in recession, but its stock market put in a reasonably good performance in 2013. As measures to spur economic growth finally start to take effect (and now that the European Central Bank has realized the depth of the Continent’s potential financial crisis), European stocks look attractively priced — especially if you believe that the EU will bounce back as well as the U.S. economy has in recent years.

Income-hungry investors jumped into high-yielding junk bonds, sending their yields to relatively low levels of around 6 percent. So far, junk bonds have held up better than higher-quality Treasuries, as strength in the stock market tends to support high-yield bonds. With very narrow spreads to high-quality bonds, though, junk bond investors aren’t getting the margin of safety against default and other adverse events that they normally do.

The high-profile bankruptcy of the city of Detroit has heightened fears about the municipal bond market. But yields higher than those of taxable bonds highlight the advantages of munis, the income from which isn’t subject to federal income tax. Look at muni bonds for a sign of the health of state and local governments nationwide.

Natural gas is still relatively inexpensive, but last year, prices more than doubled from their lowest levels in mid-2012. With so many people and businesses taking steps to shift their energy consumption to lower-cost natural gas, keeping an eye on prices to make sure the cost advantage actually survives the shift in demand is a smart move both for your investments and for your personal finances. This futures-tracking ETF won’t match the changes in spot gas prices perfectly, but it does show the day-to-day moves in natural gas generally.

Volatility was almost nonexistent in the stock market in 2013, and that sent shares of this volatility-tracking exchange-traded note plunging. If fear returns to the market, though, the iPath ETN could be a short-term winner, as it tracks what many traders refer to as the “Fear Index.” If the market stays smooth and keeps rising, though, then this iPath ETN could deliver another year of disappointing results.

In 2014 and beyond, these 14 ETFs can keep you informed on the real-time goings-on in the financial markets. That way you’ll have time to make adjustments to your portfolio instead of scrambling to react to a surprise event. 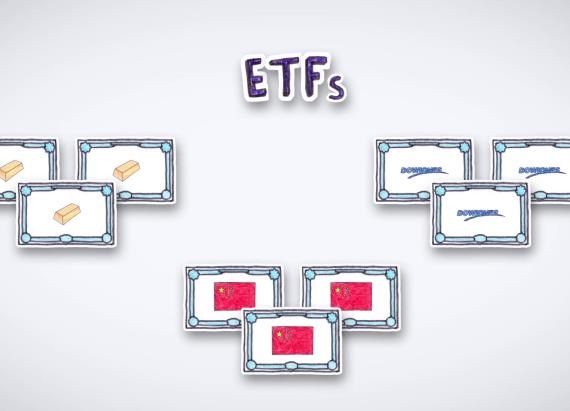